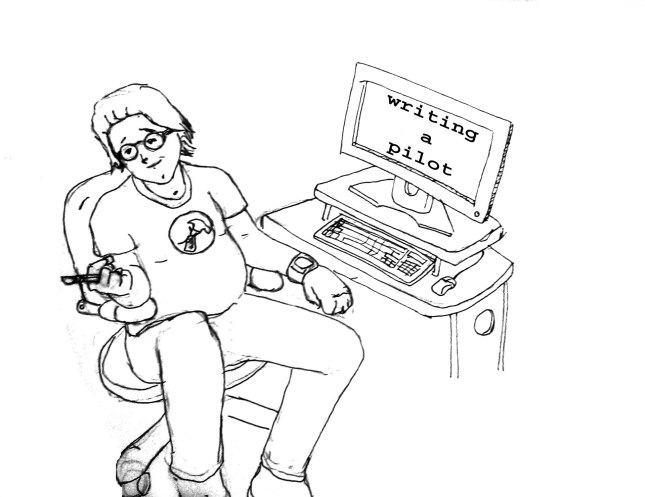 If you remember a while back I did a post on TV writing. That was from my first class which basically focused on how to write a TV spec script. Essentially you write an episode of an existing TV show.  Now I’ve picked back up with TV writing II: Electric Boogaloo…I mean writing a pilot.

I could explain to you what a pilot is, but I think I’ll turn that over to my friend Jules…

Thanks Jules. Now in case you don’t like Pulp Fiction or that video has been taken down or SOPA/PIPA/ACTA got passed and I’m in jail, I will explain what a pilot is after all.  When developing an original idea for a TV series you sell the first episode of a show to a production company and/or (not sure if it’s either or both) a network. Let me clarify, you don’t sell quite yet. You option your pilot script.

When you option the show you get a certain amount of money and the production company has a window of time to make the show. Then if they film the pilot episode you get more money. If the pilot episode is successful and a network makes a second episode that’s when the real money comes in!

So how do I sell my show? I need my elevator pitch! An elevator pitch is a short 30 second – 1 minute pitch I could rattle off if I were in an elevator with an executive or whoever could get my show made. Not that any of us will be so lucky. But when pitching the show I need to distill what’s important about my show and what’s most attractive to get someone’s attention.

What do my targets need to hear?

So that’s pitching and I have to develop my idea enough to have a sound elevator pitch for class next Monday. Come back next week for another exciting installment of Jack’s TV Writing Notes!