RSS
← After the First Week…– By Jack
See Dredd. See Dredd Fail at the Box Office. — By Jack →

Jill’s Got Nothin’ on Me — By Mack

We all have heard about Jill’s amazing but suspiciously lezzy luck on her flight to Seattle. But I’m here to tell you, next to me, she’s…I don’t know, something that’s not that lucky. So I’m on this plane to visit my brother. He just had his first kid. I know I’m an uncle now. Uncle Mack, I like the sound of that.

I’m thumbing through the American Way when I notice this girl in the row ahead of me checking me out between the seats every so often. From what I can tell she’s got an immature fire to her. The type of recklessness that would piss someone off just to do it.

“I like your ring.” I didn’t. It looked like something you’d get from a Cracker Jack’s box. But I needed to open the conversation. “Thanks. I like your necklace.” She responded with a smile. Side note. I’m very proud of my necklace. It has two pendants.  One a cross. The other a crescent moon.  People always take a second glance thinking it’s a Muslim symbol. Upon further inspection observers notice the facial feathers that make it resembles something out of a “Hey diddle diddle,” picture book. But it never fails to start conversation. 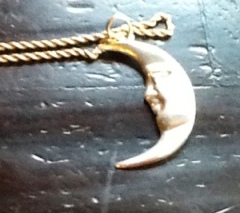 I let her continue to crane her neck back and talk to me between her seats. The barrier creates safety, but the fact that she’s inconveniencing herself to talk to me is proof she into me, or at least I’m most interesting thing in her immediate proximity.  Strangely enough for a “very full flight,” she is seated next to the lone unoccupied seat on the plane. After the drink cart passes, I depart my seat and go to sit next to her.

In addition to tattoos on her forearms and one behind her ear, she’s also drawn all over wrist in black marker. She’s dressed in tight black jeans, a red tank top, and her hair has a crimson highlight steak in the front. This girl’s got a short attention span. If I don’t keep it interesting, she’ll be done with me in a matter of seconds.
We talked family, jobs, the usual, and I could tell I was losing her. That’s when I noticed her accent was inconsistent. I never really bought her faux british tone. But now she was just going in and out of it. But I didn’t point it out. Then she declared she had 12 bothers and sisters. She rattled off names I suspect she pulled out of thin air. Then I said, “I didn’t quite catch that. Could you name them again.”  To which she refused.

Don’t get me wrong, I generally don’t lie to women, I really don’t. I don’t even embellish. But now it was clear I was dealing with a bullshitter in a bullshitty situation and as Tyler Duden put it, she was “single serving friend.” And, “If you wake up at a different time, in a different place, could you wake up as a different person?” So why not? With my hand on her thigh told her I was an accomplished artist and that I’d love to draw her. It was cheezy as all hell but she smiled and said, “Well that’s a good thing cause I’m a model.” I almost laughed my ass off but then we hit a patch of turbulence.

She immediately went into my arms pressing her eyes shut. It was the first truthful moment I had with her.
“I hate flying,” she confessed in an American accent.  After the plane righted itself out she look up at me, vulnerable for a moment, and I went into kiss her. When we pulled away, she was back into full facade, British accent and all and protested, “I never do things like that.” To which I replied, “Neither do I.”
It gets better….to be continued.

← After the First Week…– By Jack
See Dredd. See Dredd Fail at the Box Office. — By Jack →