Another ending — By Mack 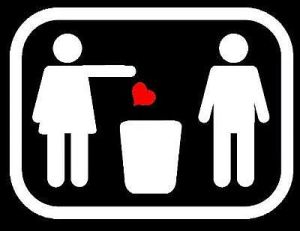 She doesn’t even use the recycling bin.

It was a few months ago.

We’re walking back to the apartment. There’s all this tension. The conversation is awkward and ﬂat. Somethin’s up. Somethin’ she needs to say but either doesn’t want to or doesn’t want to deal with the fallout. I’m 98% sure she’s about to break things off.

I’ve felt this coming for about 3 weeks. Last week I crossed from suspicion to being pretty damn sure. The change in the texts, that’s a big red flag. When you ﬁrst start, they’re like Christmas presents. You’re damn hungry for them. Over time you relax, but they still got that hint of excitement. That immediacy to respond, when that goes, then you know you’re in trouble. Granted, people get busy. Involved. They’re “going through something.” But if they’re still into you they’ll ﬁnd a way to get back to you. They’ll give you an “authentic response.” Not a cookie cut one. And the divide grows from there.

We’re a block from the apartment. 98% sure. It’s funny because there’s still 2% of me that’s still in denial. Maybe it is all in my head. Maybe she really is going through something. For some stupid reason I think that if I get her back to my room, get her in my bed, I can somehow fix it. I don’t know, remind her of the physical connection? Maybe I just want her one more time.

Then she stops. She looks down. Brushes her hair out of her face. Then looks up at me. It’s this moment, this second, where I’m sure it’s coming. But it hasn’t happened yet! She’s still mine! This look is coming from one place, the place of her being my girlfriend. When she opens her mouth and says what she gonna say, it’ll be from somewhere else. Foreign. Independent. And I won’t be welcome anymore.

My mind has jumps to a month ago. The last “good” time we had together. I say good, I mean fun. I had already started to figure the break up was coming. But it was something I could still fix back then. We’re outside the hospital, playing like 6 year-olds along the fence of this closed cafe. Her eyes were so different then. Filled with…I don’t know…some kind of wonder. It was like she was drinking me in.

She hops off the fence, grabs my hand, runs across the street demanding we lie in the grass. The thought of an ant or spider crawling on makes me roll my eyes. As I light my cigarette, I wonder if she’s too young for me. But it’s too late, she pulls me down. She gives me that look again. It makes me feel like some sort of diamond. Girls don’t usually make me feel precious. It is a damn sweet memory.

In the now. She begins to speak. The thing that I hate, is that what she’s gonna say, it changes that memory. Like, corrupts it. Making me question it. For a while, I just assume it was a lie. How could she be so damn in love with me then and now…nothing?…”thanks for playing, here’s a copy of the home game.” I’ll eventually figure it was a misunderstanding.

She says the words I know she has to say. All of a sudden I’m so damn hot. I glaze over a bit. She talks. When I was younger man I might have pleaded and begged. When I was younger. but not quite that young, I might have attacked her. Been vile. If I did truly feel like she was the “one” I might lay it all on the line pouring my heart out. But deep down I know she wasn’t. At least not from our relationship so far. What’s funny is that I really wanted her to be the “one.” But I’m starting to believe I may not be capable of feeling that for anyone. So instead of all those other actions, I just…comply.

We reach an understanding. As much of one as I think we can reach. And we have that goodbye kiss. That take in all and everything you can. It is a mix of sweet familiarity and the pain of euthanized hope. I feel her tears on my cheek as we pull away half an inch. Just breathing, thinking, feeling. Lingering in hesitation to let go. That uncomfortable heat returns. It’s an anxious feeling, but I stomach it for as long as I can. We eventually
we do let go and slowly back away from each other.

Thank you’s and pleasant words are exchanged. I ask her what she’s going to do. She says she’s gonna stay at a friend’s tonight. Then I clarify, I mean with the roommate situation.

“Gonna go to Brooklyn or somethin’?”

“Actually, I’m going to move back to Seattle. I’ve been thinking about leaving New York for a while.”

It’s the 2nd gut bomb of the night, but I didn’t see this one coming. I figure it’s for the best. I watch her leave for her friend’s for the night. There a good breath of relief. The anticipation of doom is finally gone. But of course I’m sad and somewhat angry. But mostly sad. I’ll miss Jill.