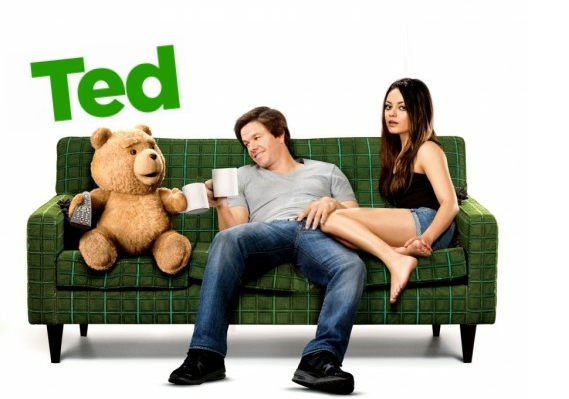 But teddy bears are wholesome!!

Should you see Seth MacFarlane’s new comedy Ted about a crude lecherous but lovable teddy bear come to life? Chances are you’ve already decided. If you like Family Guy and all of MacFarlane’s spin offs you’re going to laugh and have a fun time. If you don’t, you won’t like this movie.

Now for a more thorough opinion. I think Seth MacFarlane is funny. He makes jokes about things many of  us are thinking and does so through crude and clever ways. Often times it’s based around pop culture from the 1980’s, but I’m 28 and so works for me. Can he cross the line and rely on stereotype, becoming both tired and offensive? Absolutely. And sometimes it’s obvious his scrips are too short and he resorts to filler. But all in all I’m probably going to laugh when I watch him.

Ha ha…I have so much money now.

Is Seth MacFarlane a talented story teller? Not so much. His plots are vessels for his jokes. And that is very true with Ted.   It doesn’t take a genius to take one look at the poster and guess the plot.  John Bennett (Mark Wahlberg) wished for a living teddy bear as a boy and hot damn it came true. Now an adult, John and Ted are still best buds. Ted (voiced by Seth MacFarlane) is crude but lovable. John’s long time girlfriend Lori (Mila Kunis) thinks he needs to grow up which requires saying goodbye to Ted.  And let’s throw in a crazy guy(Giovanni Ribisi) who wants to kidnap the bear so we can have a chase scene.  Oh and Community’s Joel McHale shows up as the douche bag that wants to bang Mila Kunis. He has one good line.

The question is does the comedy work? For the most part, yes. The opening is hilarious. The humor mostly hits throughout the middle. Occasionally, I was actually sick of the jokes and wanted the damn thing to move forward.  But the ending really sags. It’s both predictable and tiresome.   Ted is essentially Peter Griffin (there’s a crack about this in the film.) When he’s on screen you’re gonna laugh. I’ll hand it to the script for making the girlfriend, Lori, actually likable. She puts up with a lot of John’s crap before she lays down the Ted or me ultimatum.

But my question is why Mark Wahlberg? He’s not very funny. He doesn’t pull off the every man particularly well. There’s this feeling of “I’m love this walking teddy bear, I do this infantile shit, and I’m obsessed with Flash Gordon because the script tells me to.” I just don’t buy him. The character of John (not Wahlberg’s fault) fucks up his life so many times, it’s pretty hard to stay with him by the end.

All in all I mostly had a smile on my face. $13 bucks to see it in the theater? I didn’t smile that much. It probably be better to wait for the DVD, get drunk or stoned with a group of your friends and pass out before the end.