Tag Archives: What’s The Hold Up

And That Was The Last Time… (the video) — by Michael

And here’s this one live.

Posted by eltram on September 24, 2014 in entertainment, etc..., Reviews, Writing

Tags: What's The Hold Up

And that was the last time… — By Michael

Let me tell you the last time someone conned me. I was 19 years old and I was a stupid 19. Somehow I ended up in London, wandering around the back streets of Piccadilly Circus. I see this gorgeous girl standing outside some strip club next to a sign that says “beer and a show £5.” Now this girl has got the thinnest smoothest legs I’ve ever seen. She could have been selling cancer in a pop can and I would have gone over to listen to the pitch.

“£5 pound for a beer and a show. That’s it?”, “That’s it,” she says. I give her a 5. She puts it in her purse and hands me a laminated white card and we go downstairs. She leads through a dimly lit lounge with a couch (occupied by some black guy with a girl on each arm)  and old woman behind a coat check, and into the next room. Then she asks me if I’m ready for the show.

In the next room there are dozens of couches and a stage with a single pole.  An even more beautiful woman comes up to me with my beer. This girl has straight blonde hair, gorgeous smile, and is only wearing black lingerie. She sits down next to me and starts asking me questions. Where I’m from, where I grew up, and she’s talking to me like I’m the most interesting person in the world. These days anytime anyone is that interested in me, I get suspicious, but 19 me kept yakking away.

After a couple of minutes, she stops me and says, the show will start as soon as I pay the bill. I hand her the white laminated card the other girl gave me, and blondie says, “No that’s for the show, I mean the bill.” I have no idea what she’s talking about but then she hands me the menu. She points to the bottom which says in fine print, Services of the companion £277. Everything comes to a screeching halt and I demand to talk to the manager (as if this were a respectable establishment).

I find myself back in the lounge arguing with the old lady behind the coat check. Blocking the stairs is the black guy from the couch, but now his arms are crossed, ready for any shit I’m going to pull.  Coat check lady is telling me the menu is clearly marked and that I have to pay for services. Normally I wouldn’t care, I’d just say “fuck you I don’t have any money.” But I had £500 on me for an… errand. That 500 needed to go where it was going. “If you don’t have any money, just open your wallet and show it to the camera.” I turn around and face the brother blocking my path. “You going to stop me if I leave?” and he comes back with “You wanna try me?”

So that’s when I pull out my cell phone. “Put that away. You can make calls down here.” the old lady commands.  And I know something’s up. “If you’re so sure the £277 charge is legit, why don’t I call the cops, they come down here, and if they say I owe you, I’ll pay.” Now I’m bluffing. Because that errand I was doing… well I still had some of the product on me. And believe me if the cops came down here, I’d be in a ton more trouble than she’d be.

She’s staring me right in the face and I’m staring right back. “We had a party of rich Arabs in here last night, they were more than happy to pay.” I spout back “I’m dialing 999. ” “I said put that away.” I can see the old lady making nods at the black guy, probably to grab the phone out of my hand. “I’m pressing send.”  Then curtly and with an air of superiority I hear “Get the fuck out!” And for some reason I reply with “Thank you.” And I bolt.

Now I’m outside making sure the black guy isn’t following me, heart racing, and I’m so fucking pissed at myself. All the little clues I should have seen are now painfully obvious. The cheap show, the black dude on the couch, the empty room.  And that’s when I decide right there, I’m not going to be a sucker for anyone ever again. That I would always been on the other end of it.  Couple of years later I see that old lady come into Vinney’s in New Jersey. Same woman, I swear to God. Right there right in front of me. So I… well that’s a story for another time.

See this monologue come to life later this week!

Once Upon A Time – By Victor 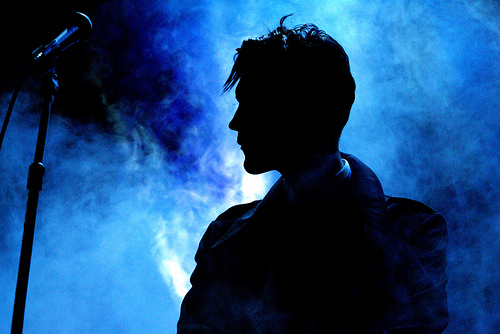 Can you ever know where you’re supposed to be in life?  Some people will tell you, “you just know. “

Six years ago, the Viper Room. We may not have been the headliner, but still. People come to the Viper Room, not just your fans, and not just the bar regulars. People that can make things happen.

We get there for warm up and the place is heaven. But I got this nagging feeling. The crowd. No matter how nice the venue, a bad crowd can mean the difference between getting signed with a label or never playing there again. That’s when Sticks can’t keep his shit together.  His girlfriend dumped him Friday or some shit and he’s had a few fifths between last night and now.

15 minutes before the show Mike is trying to cheer him up and get him in the game and I’m calling every drummer I’ve ever met, I mean I’m literally on the phone with a guy from my high school marching band. But then Sticks jumps up like he just had a Five Hour Enema and says “Fuck that bitch, she ain’t going to bring me down.”

We go out on stage and the place is PACKED. I’ve never played for an audience this size. I mean it was constant crowd between the stage and the bar. We start playing with “Trueno de Mexico” and Sticks is off. We know it, the audience knows it, it’s bad. We stumble though the song. So I go off the setlist and play “Impossible Yesterday” next. Now Impossible Yesterday is our best song, we were saving it for the finale, but if I don’t do something, we’re not going to make it to the finale.

The lucky thing about the song is that starts with an a cappella solo. No drums. It’s just me. Maybe if Sticks listens to me, maybe he can get back on beat. But here’s the other thing. I… L O V E  that solo. When I sing it, the world shuts out and I just crush it.

I’m feeling it all, all at once, now today.
The fears and the problems creeping up once again.
The beds just too big, I wish you would come home.
And sooth the soul of this old tired fool.

For years I would have said moments like that is was what it was all about for me. So when it all dried up, it was hard. Very hard. Seeing that possibility get farther and farther away. Maybe you never know where you’re supposed to be in life.

Help us make it happen.

See the video of this later this week!

Support “What’s the Hold Up?”