RSS
← The TV facts of life — By JACK
Snow in your face, money in your pocket, a place to call home. And monsters! — By Jill → 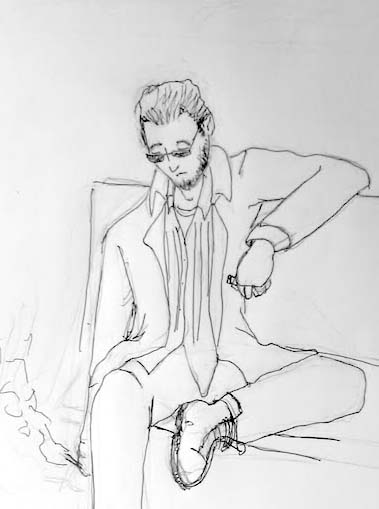 So I’ve got this kind of sixth sense for when someone’s about to break up with me. It first happened when I was dating Jenna. I was 22 and she was 18. I said I’d never date that young again but Marge is  a whole other story. We made out most of the afternoon, but at this one point, the song I was a Kaleidoscopic popped into my head. The lyrics of this one section kept repeating.

And this is when I forget to breathe,
And all the things I’ve scripted
They sound unfounded.

And it’s the look that you’re giving me,
that tells me exactly what you are thinking
this ain’t workin’ anymore.

I walked her home and as we’re walking she says to herself  “next tree. No, next tree.” Then she turns to me and BAM. Ends it right there.  Ever since then, I’ve taken particular notice of when songs pop into my head.

I met Kelly for coffee today. I expected her to be waiting for me. Maybe I was there early, I don’t remember. I kept looking at my hands for some reason. When did they get this hairy? Kelly and I started dating off of an internet dating site.  The attitudes of most girls profiles really piss me off. Most of them try to come off as quirky and off beat but in the exact same way as the next girl. But Kelly liked action movies.

She arrived and had been shopping. I found that odd. She’s not a big spender. Once she got settled and we got through the standard pleasantries, she segued to “I’ve meaning to talk about–”
I interrupted her mid-sentence with, “This isn’t working for me.”  I leaned back and looked at the Starbucks LCD screen. The momentary display of Eva Cassidy was my safe house.

“Excuse me?” trying to deny what she had just heard.
A list of lies fired through my head. -I just not ready for a relationship-I think we’re too different-We want different things-I think you can do better (yea I actually considered saying that one.)-

But what came out was, “I don’t want to date you anymore.” And after my eyes returned to Eva Cassidy. I got up from the table and walked to the door. There I hesitated. Keep going on check in with her? I looked back and she was sitting at the table as if I were still sitting in front of her. She hadn’t moved.

I immediately walked to a deli and bought a pack of cigarettes. This pack will be the last pack.

–Big Mack At… you get the idea.

← The TV facts of life — By JACK
Snow in your face, money in your pocket, a place to call home. And monsters! — By Jill →